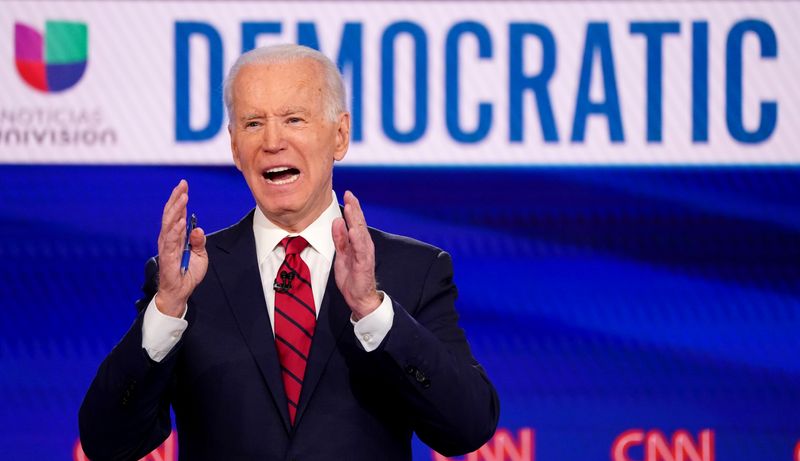 (Reuters) – The AFL-CIO, the largest U.S. coalition of labor unions, endorsed Democrat Joe Biden for president on Tuesday, promising to launch an effort to beat Republican President Donald Trump in the Nov. 3 election.

It became the latest labor group to back the former vice president as he seeks to reclaim support from blue-collar workers who voted for Trump in 2016, especially in key election battleground states like Michigan, Wisconsin and Pennsylvania.

The 12.5 million-member, 55-union AFL-CIO is a reliable Democratic ally that was expected to endorse Biden after he became the presumptive Democratic presidential nominee. It endorsed Trump’s Democratic opponent Hillary Clinton in 2016.

The AFL-CIO’s board voted to endorse Biden, the organization said.

“Joe Biden is a lifelong supporter of workers and has fought his entire career for living wages, health care, retirement security and civil rights,” AFL-CIO President Richard Trumka said in a statement.

The AFL-CIO hopes to grab some of Trump’s support from working-class voters who have split from the Democratic Party on key issues such as energy and immigration.

“I’m running to be the best president for workers in American history. As we come out of this crisis, there is an incredible need and opportunity to create good-paying, union jobs across the country,” Biden said in a statement.

In 2016, Trump promoted himself as a champion of workers, promising to rip up international trade agreements and close America’s borders. The businessman-turned-politician is again courting these workers, arguing Biden’s policies on energy and global affairs will cost them jobs.

“It would be news if union leaders didn’t endorse a Democrat, but the workers across our country are with President Trump,” said Erin Perrine, a Trump campaign spokeswoman.

Trump’s blue-collar support helped him secure narrow 2016 victories in Pennsylvania, Michigan and Wisconsin – so-called Rust Belt states with declining industries. Trumka told the Washington Post the AFL-CIO will focus on these three states along with other election battlegrounds such as Florida, Arizona and Minnesota.