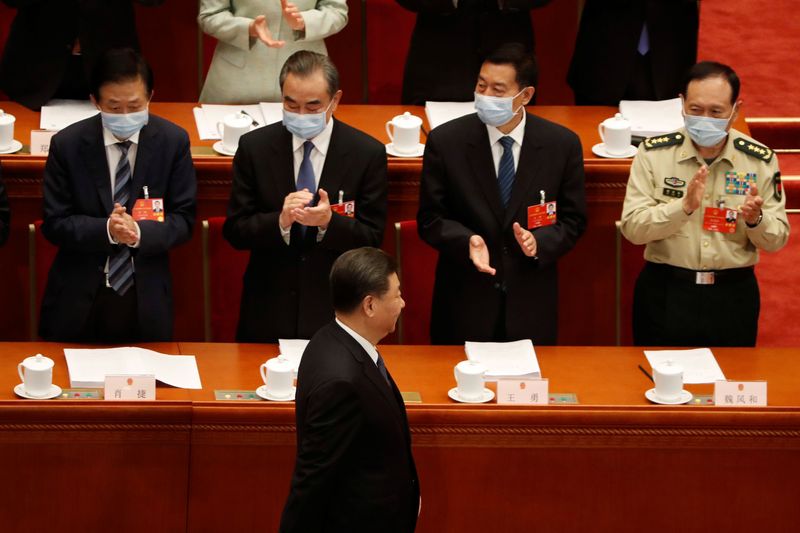 BEIJING (Reuters) – China’s top leaders took the stage in front of a sea of masked delegates for the opening of parliament on Friday, the culmination of intensive planning at a time when gatherings around the world have been curtailed by the new coronavirus.

President Xi Jinping and other top leaders appeared without masks in front of about 5,000 delegates from parliament, known as the National People’s Congress (NPC), and a government advisory body, for the top annual political assembly.

Delegates travelling from across the country had to have multiple coronavirus tests and they have been sequestered in hotels, while media events and speeches have been moved online.

But there was no sign of social distancing at the opening session in the Great Hall of the People with the delegates sitting side by side in rows as usual.

Originally scheduled for early March, the NPC was delayed by more than two months because of a nationwide lockdown to block the spread of the coronavirus. The lockdown remained in place in the capital until late April.

It is the first time the largely rubber-stamp parliament has been delayed in 25 years and its staging, although late, is a clear show of resolve by the government as it grapples with an economic slowdown caused by the coronavirus.

“From a political perspective, it’s important they hold it despite the costs and risks involved because of coronavirus,” said Graeme Smith, fellow at the Department of Pacific Affairs at the Australian National University.

“It’s a symbol of strength and reassurance to the people but also to the party,” he said, referring to the ruling Communist Party.

As part of coronavirus checks, attendees had to submit details of their travel and contacts in recent weeks, state media reported. Some also had to spend time in quarantine.

State-media staff were quarantined for seven days and have been told they can only move between their hotel and the media centre during the week-long event.

About 200 delegates from Hong Kong were bussed across to mainland China before taking nucleic acid tests and flying to Beijing, where they had another test.

In the crowd of delegates gathering early on Friday, some wore face masks decorated to match their ethnic costumes, which are typically worn during the congress.

The few foreign reporters allowed to cover Friday’s opening session had to arrive on Thursday afternoon to submit a nucleic acid test, then had to stay in a designated hotel to gain access to the hall off Tiananmen Square (NYSE:SQ) where the congress is held.

As usual, authorities stepped up city-wide security before the congress, banning large gatherings, boosting the police presence and setting up extra checkpoints throughout the city.

The congress opens with a speech by the premier outlining goals for the coming year.

During Friday’s address, the shortest in 40 years, Premier Li Keqiang pledged to step up stimulus spending.

In another break with tradition, the government declined to announce a target for 2020 gross domestic product (GDP) growth for the first time since it began announcing them in 1990.

The economy contracted by 6.8% in the first quarter as the coronavirus outbreak paralysed production.