Is It Time To Buy FAANG Stocks?

The FAANG stocks, including Facebook, Amazon, Apple, Netflix and Alphabet (NASDAQ:GOOGL), had all been leading beneficiaries of the bull market in stocks. The risk-off conditions that have gripped markets across all asset classes have caused many investors and traders to move to the sidelines. In 2018 and 2019, the trade war between the US and China caused periods of market volatility, but Coronavirus is different as it is a medical emergency that triggered a financial crisis.

The US Fed responded to the current situation with a fifty-basis point rate cut on March 3. Last week, the central bank blasted the market with a one and one-half trillion-dollar liquidity bazooka. While monetary policy accommodation and more liquidity in markets have some impact on markets, it does nothing to slow the spread of the virus, which continues to spread around the globe. At the same time, the price carnage in the oil market caused by a decision of OPEC and the Russians to address demand destruction in the energy commodity by flooding the market with petroleum only exacerbated selling in markets. The potential of rising bankruptcies has put additional pressure on companies and the financial sector. The US also faces a divisive election later this year, which is another factor that has led to what is developing into a perfect bearish storm.

The high-flying FANG stocks were not immune from risk-off conditions, but all of the companies are likely to continue to earn profits in the current environment, and some may even do better as more people remain in their homes.

Facebook (NASDAQ:FB), the company that connects people all over the world via mobile devices and computers, had its market cap sliced and diced to $485.375 billion at a closing price of $170.28 on Friday, March 13. 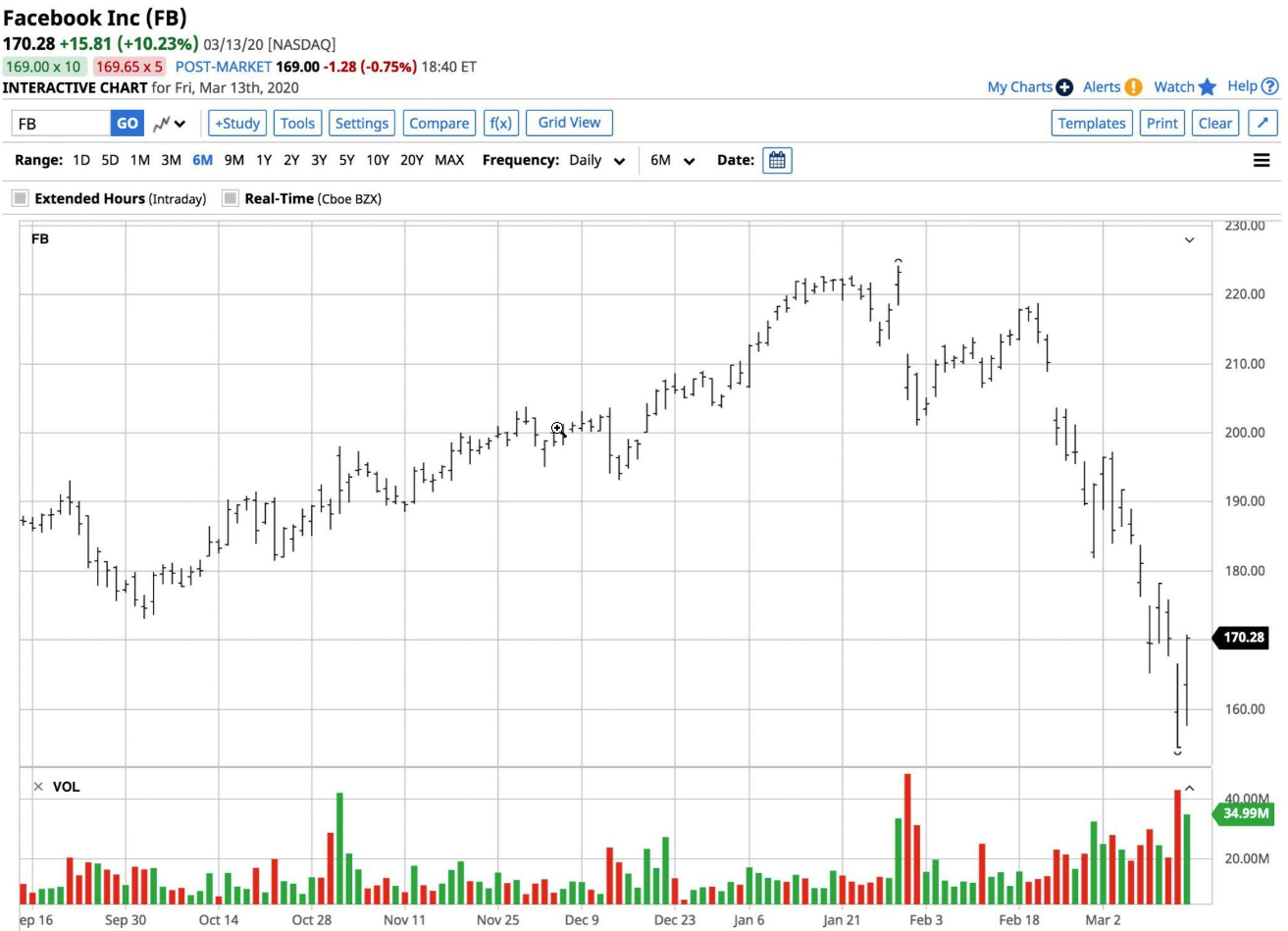 The chart shows that FB shares fell from $224.20 on January 29 to $170.28 at the end of last week or 24%. As more people stay at home, hours spent on Facebook will likely rise. However, the advertising revenue in the current environment will present a challenge for the company.

Jeff Bezos is the world’s wealthiest person, but his billion have dropped with Amazon (NASDAQ:AMZN) shares. Amazon fell out of the trillion-dollar club with a market cap of $888.591 billion. 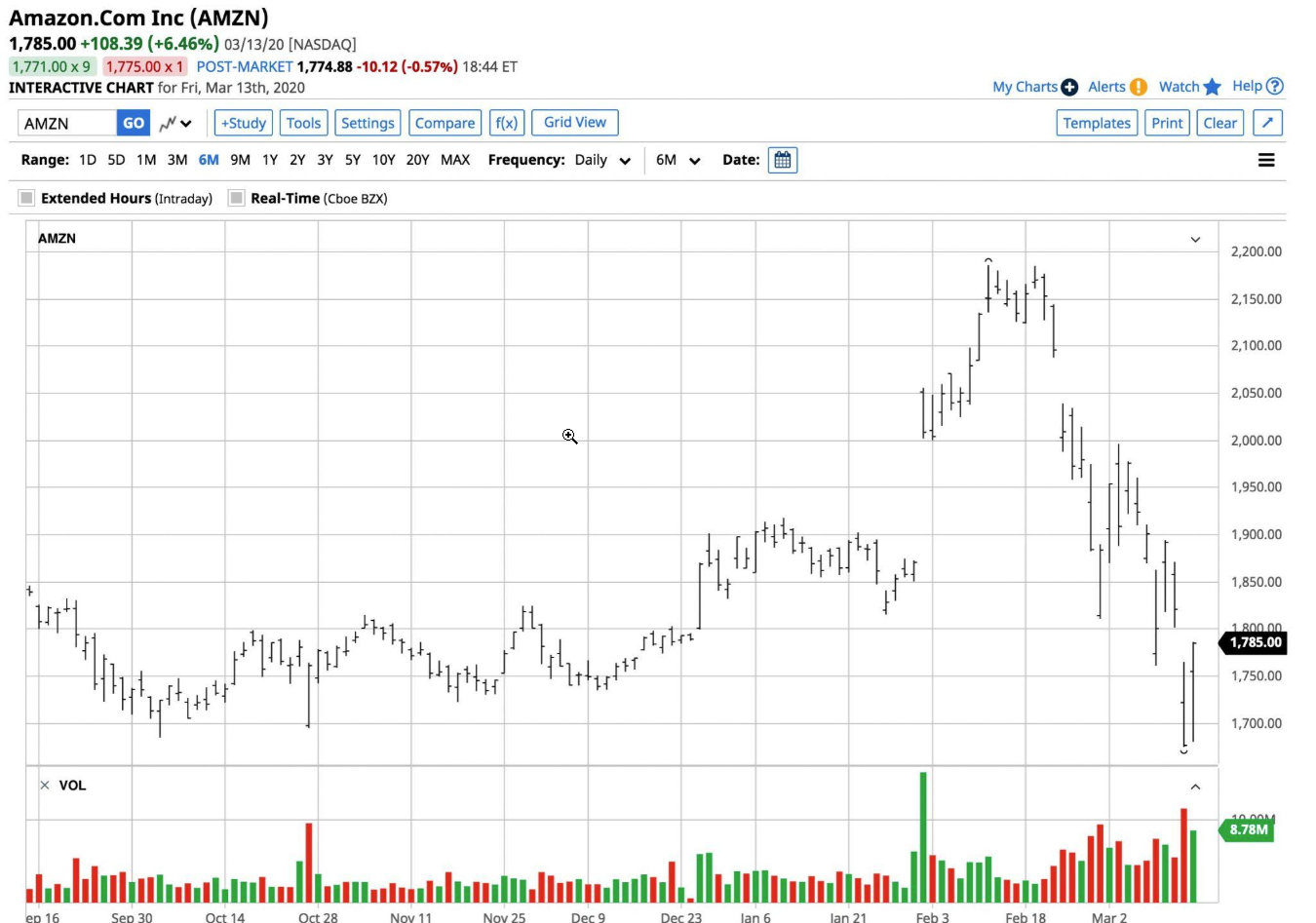 Amazon (AMZN) shares fell from $2185.95 on February 11 to close at $1785 on March 5, 18.3% lower. Amazon could see more business as people avoid stores and order products online in the current environment.

Apple (NASDAQ:AAPL) shares remained in the trillion-dollar club, but the market cap fell to $1.216 trillion at $277.97 per share as of the close of business on March 13. 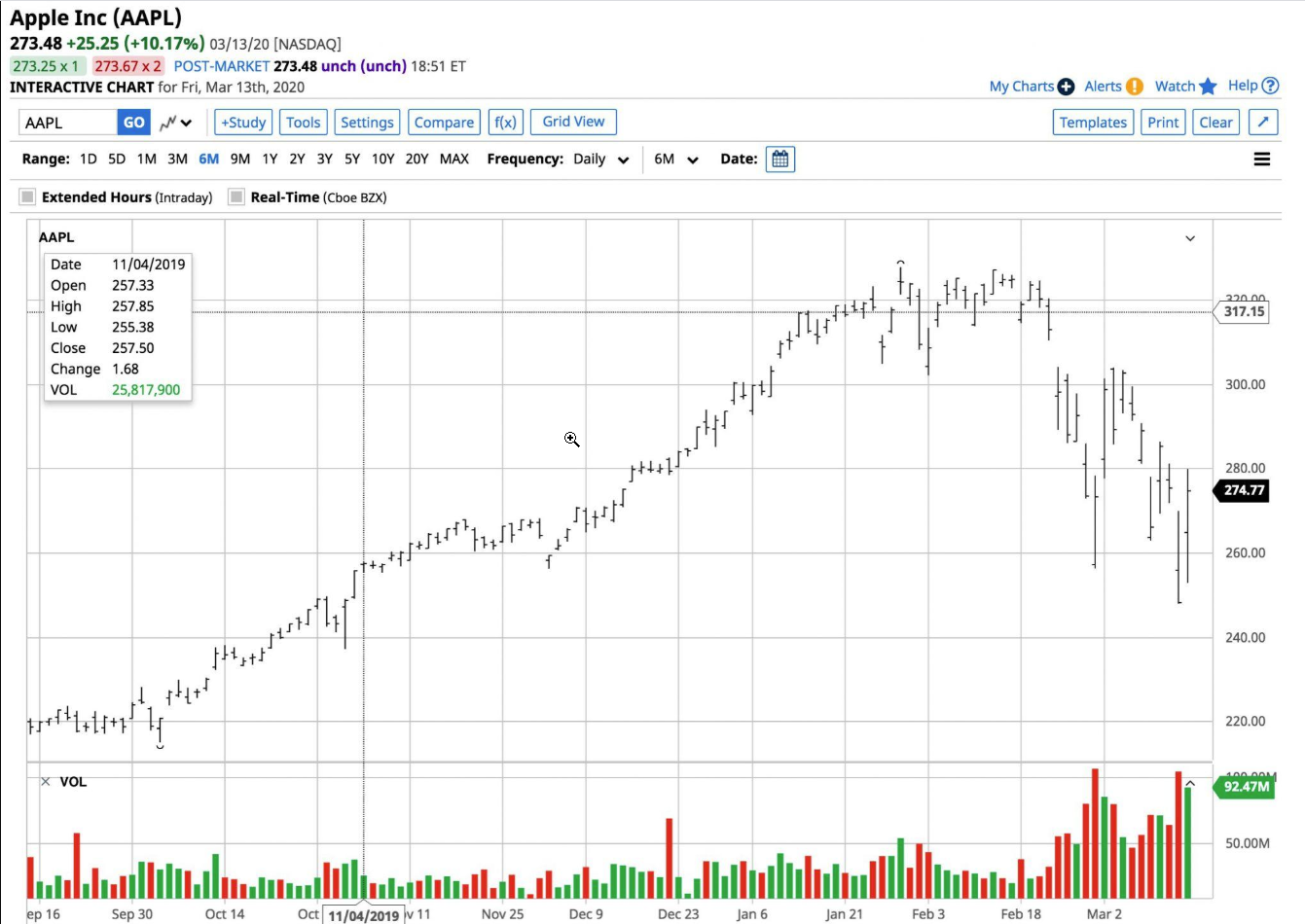 Apple shares fell from a high of $327.85 on January 29, a decline of 15.2% from the 2020 peak. Sales of Apple (AAPL) products could suffer as fewer people venture to their local Apple stores to talk to the “geniuses” over the coming weeks as social distancing interferes with the company’s business. However, an improvement in the conditions in China is likely to support its business in the world’s most populous nation.

Netflix (NASDAQ:NFLX) could be one of the most significant beneficiaries of Coronavirus, as homebound people will seek entertainment. In a world without sporting events, the demand for entertainment could reach a new peak. However, Netflix was not immune to the risk-off environment as its market cap dropped to $147.569 billion. 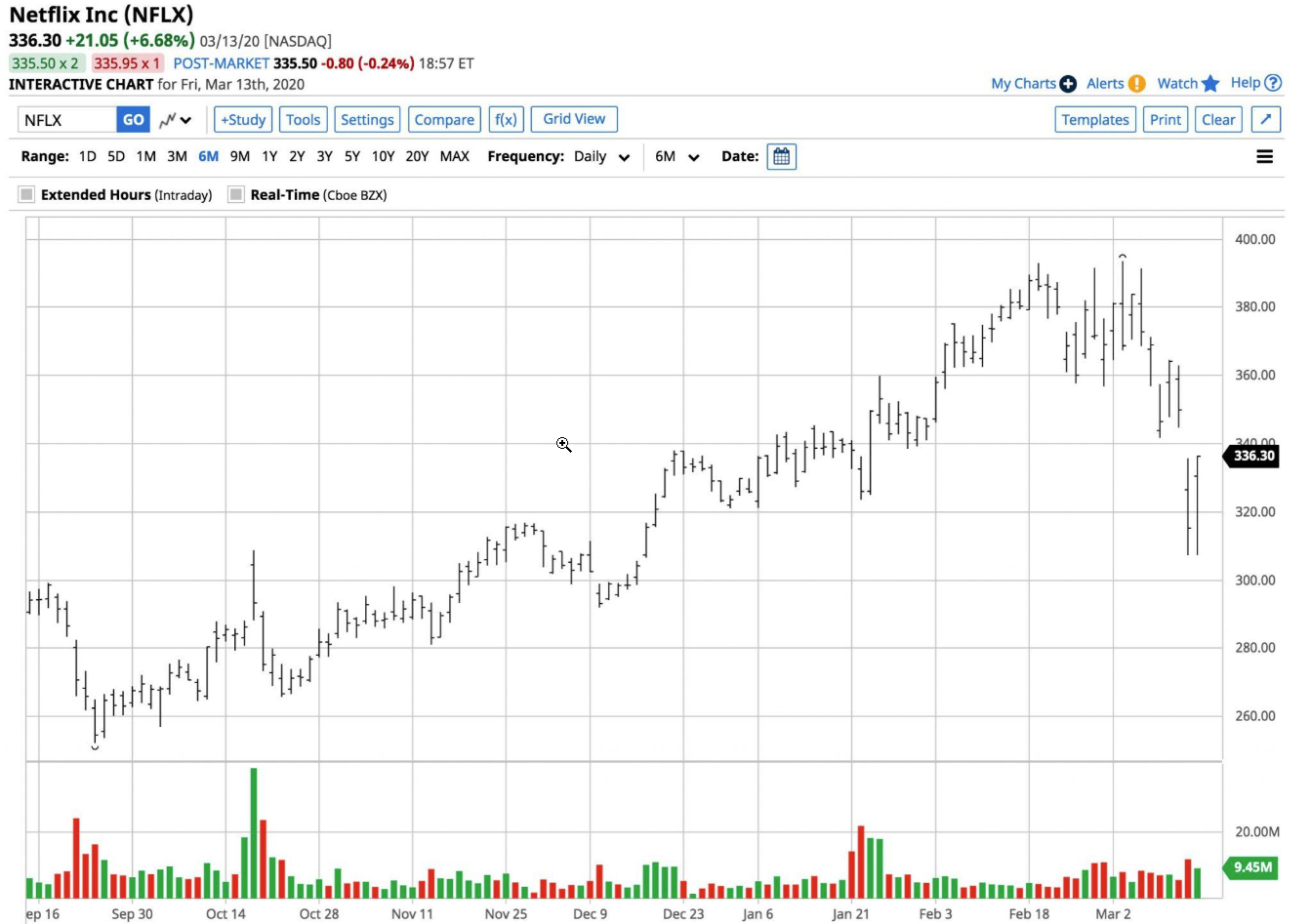 Finally, more people at home will be googling on their computers and mobile devices, but the market cap of Alphabet (NASDAQ:GOOG) dropped to $837.04 billion. The stock market has been ugly since reaching a record high on February 20.

As the chart of the E-Mini S&P 500 futures contract displays, the contract fell from a record high of 3,397.75 on February 20 to 2652.75 on March 13, a decline of 21.9%. When it comes to the FAANG stocks, only Facebook (FB) underperformed the E-Mini from the high price of the shares in 2020. Alphabet (GOOG) outperformed, but the shares still dropped by over 20%. The two companies are most likely to suffer from a decline in advertising revenue, putting them at a higher risk during the current risk-off period.

Meanwhile, Amazon (AMZN), Apple (AAPL), Netflix (NFLX) outperformed the E-Mini S&P 500, which could be a sign the three companies could thrive in the current environment and would experience explosive moves when fears calm. However, we are in the early days of the Coronavirus crisis, and things could get a lot worse before they get better. FAANG lost its bite over the past weeks. Still, the leaders of the stocks market will eventually make stunning comebacks as they all have incredible market share in their respective business sectors. On further downdrafts in the stock market, buying FAANG stocks on a scale-down basis leaving lots of room to add at lower levels, could wind up being the optimal approach for investors with a long-term horizon. Be cautious in markets in this environment of unprecedented risk.