For months, the infernos have raged through Australia’s southeast, leaving parts of the country choking under some of the worst air pollution in the world.
Since September, more than 18 million hectares (44 million acres) of bush, land and forest have been burned. At least 28 people have died, around 3,000 homes have been destroyed and about one billion animals could have been affected. 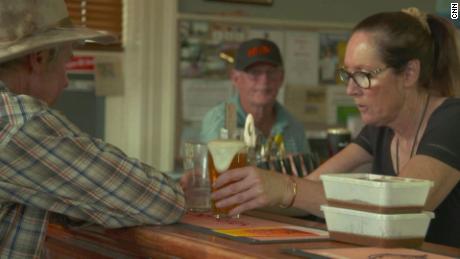 The parched legacy of drought in Murrurundi, an Australian town with beer but no water
Heavy rain down the east coast this week has temporarily eased the crisis, but authorities warn the fire risk is not over — bushfire season typically ends in March. Only last week, Australia’s capital city of Canberra declared a state of emergency as bushfires moved rapidly in the area.
Scientists had warned for more than a decade that an extreme bushfire season was coming — and that the climate crisis was to blame.
Read More
While natural climate drivers created a perfect storm of hot and dry conditions this year, the sheer scale and intensity of the recent fires have led some experts to claim the world has now reached a turning point.
“I think the size and the intensity of these fires, coupled with the drought, have really just pushed Australia into a place that doesn’t feel like home anymore.” said Linden Ashcroft, lecturer in climate science and science communication at Melbourne University’s School of Earth Science. “It doesn’t feel safe anymore.”

A dry bush waiting for a spark

Furthermore, Australia is known for extreme fluctuations in its weather. In summer, it’s not uncommon for towns to see 40?C weather one day and heavy hailstorms the next.
But the climate crisis is making those fluctuations worse, experts say.
“What we’re seeing now is that natural variability is occurring on top of the long-term, human-induced climate changes, and that we’re seeing the extremes becoming even more extreme,” said Nerilie Abram, professor at the Australia National University Research School of Earth Sciences in Melbourne.
Driving Australia’s erratic weather are several climate systems that conspired in such a way this year to exacerbate the hot, dry conditions.
A climate phenomenon called the Indian Ocean Dipole (IOD) had a big role. You’re not alone if you’ve never heard of the IOD, but you might know about its counterpart in the Pacific Ocean, El Nino. El Nino is a warming of the eastern Pacific Ocean, mainly along the Equator, and it can change circulation patterns around the globe.
The IOD describes changes in sea surface temperatures between the opposing eastern (near Indonesia) and western (near Africa) parts of the Indian Ocean, and it has three phases: neutral, positive and negative.
Changes between these phases can affect rainfall patterns — so dry conditions in Australia could mean flooding thousands of miles away in East Africa, or vice versa.
A positive IOD — which is what we’ve seen in recent months — is a sustained warming of the waters near the Horn of Africa while water to the northwest of Australia becomes unusually cool. This cuts off one of Australia’s key sources of moisture, leading to less rainfall and higher than normal temperatures.
Last year was one of the strongest positive IOD events on record, according to the Australian Bureau of Meteorology, meaning Australia experienced extremely hot and extremely dry conditions, on top of long-term warming.
Another climate system called the Southern Annular Mode (SAM) also contributed to Australia’s dry weather conditions this year. The SAM is the movement of a belt of westerly winds that are pushed either north toward Australia or south toward Antarctica, and its impact on Australia differs depending on the season. 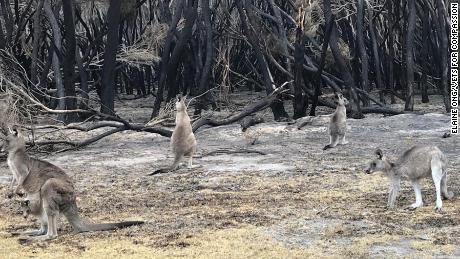 On kangaroo killing field, from horror to hope for Australian animals devastated by wildfires
There has been a long term trend of the SAM becoming more positive, Abram said, which means that the westerly winds between Australia and Antarctica are shifting further southwards. As a consequence, the southern parts of Australia that receive winter rainfall from those winds are not receiving as much.
But the SAM went through a negative phase from late October to late December — the start of Australia’s summer — shifting the belt of westerly winds over the Southern Ocean northwards towards the equator, fanning the flames of the bushfires.
“These climate drivers acted to not only enhance fire dangers, but also suppress the thunderstorm activity that we would normally expect to impact eastern parts of Australia during spring and summer,” said Diana Eadie, meteorologist for the Australian Bureau of Meteorology’s Extreme Weather Desk.
Scientists say that rising greenhouse gas emissions are distorting those natural climate drivers.
Since the 1960s, positive Indian Ocean Dipole events have been becoming more common and stronger, according to Abram, and climate models suggest that trend is likely to continue.
“If we continue on a high greenhouse gas emission pathway, then we would expect these events to be three times more frequent in the 21st century compared to the 20th century because of the human-induced climate change,” she said.

This is the proof

Public outrage over the fires has been mounting, with much of the anger directed at Australian Prime Minister Scott Morrison and his administration’s climate policies and response to the fires.
Last week, more than 400 climate, weather and fire scientists signed an open letter calling on Australia’s leaders and policymakers to take “genuine concerted action to reduce global emissions of greenhouse gases.” The scientists unequivocally link the bushfires to human-induced climate change.
Abram, one of the signatories of the letter, said it had been “disheartening” as a climate scientist to have correctly made predictions for years and for governments to have basically ignored them.
“This is what climate change looks like — it is actually here now, it’s affecting us now. And it is going to get worse unless we dramatically reduce greenhouse gas emissions,” Abram added.
Along with increased risk of fire, more intense droughts, heatwaves, prolonged summers and less rain are in store for Australia if the world doesn’t limit warming to 1.5?C above pre-industrial levels, in accordance with the Paris Agreement. Global C02 emissions are currently track to warm the earth by 3?C or more by the end of the century. 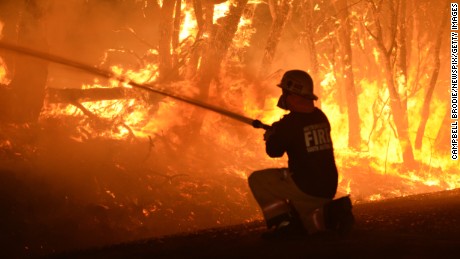 Australia’s indigenous people have a solution for the country’s bushfires. And it’s been around for 50,000 years
Questions are being asked over how that hotter future would impact water resources, livelihoods, businesses, tourism, and even the ability to live in certain places of the country.
“There probably needs to be some discussion about where it is safe to live or where it is safe to build,” Ashcroft said. “(But) I don’t think that Australia will get to a point where it’ll be a Mad Max anarchy kind of thing. I believe that we have the ability to adapt and to change what we do.”
Australia needs to take a two-pronged approach to survive the coming decades, experts say: Adapt to warming global temperatures and mitigate against them and their affects. Moving away from fossil fuel energy sources will be key.
What is needed now, Abram said, is real leadership.
“Because what we’re talking about is not just a little bit of tweaking around the edges in terms of our economies,” she said. “We’re talking about the need for a managed transition of the way that we operate.”